Growing Up in Margaret Place

My family, Dr. and Mrs. (Elizabeth) John Keller Griffith moved to Lake Charles in 1948/49 with their daughter Beth. My father began his medical career in Lake Charles with the Fisher Clinic located on the corner of Ryan (Dr. Michael DeBakey Drive) and Wilson Ave. Their first residence was a garage apartment located on the alley between Park and Wilson avenues owned by the Castle family. By 1950 my family had moved to a duplex apartment on the corner of Grove and Harrison streets living there when my twin brother (John Keller, III) and I were born. When my mother went to St. Patrick's hospital for our delivery, the other duplex occupants, the Cecil (Lillian) Cutrers kept my sister Beth until Granny arrived.  After a brief move to a home on Pujo St the Griffiths bought the home at 317 Wilson Ave. around 1953. The home had been previously owned/occupied by the Preston (Ethel) Savoys and Sheriff Ham Reid.

Circa 1958/59 the David Garrisons undertook a major remodel and landscape of their home. Lambert Landscape Co. of Dallas TX was the landscape contractor for the project. The project took months.  One night, toward the end of the project, my mother was putting her little twins to bed. Gazing from the upstaris window, she pulled down the shades, onto the very muddy, unfinished, Garrison backard.  The Garrisons had an important deadline. Their daughter Ducky was getting married with a huge reception planned in the newly landscped yard.  Unbeknown to my mother, the workmen worked through the night, completely sodding and installing plants. The next morning, upon opening the bedroom shades, a miracle had taken place. The muddy construction site had been transformed into an exquisite showplace including beds of white tulips and blooming hydrangeas. Truly a startling, jaw dropping double take event. There was an outgoing mailbox on the corner of Wilson and Pithon.

Red Fire alarm boxes were located on the corners of Wilson and Pithon and on Park Ave. and Griffith Street.

For years, our mail man was Sam. Around Christmas we would write our letter to Santa and place S&H Green Stamps on the envelope as postge. Sam would clandestinely smuggle the letters back to Mama so she would know what we wanted for Christmas.

The neighborhood football fields were the lots between the Lewis' and the Sharman's or at the Paret.Jr's.

The Paret, Sr's wharf on Shell Beach Drive was the neighborhood fishing spot.

Mrs. Lewis had to take the little Griffith twins home by their hands when she, fearing they may burn themseleves, caught them catching bees in the clover and bar-b-queing them on her still hot pit.

Mrs. Petitjean (the former Catholic Bishops residence, now the Piper home) lived across the street and dropped by for a visit. She recently had painted her home a shade of purple.  Young Beth Griffith declared, "my Daddy thinks your house is an ugly color". The gracious guest declared "my husband thinks it's ugly, too." Obviously, my red faced mother was humilitaed. An out of the mouths of babes moment. Soon, thereafter, the Petijeans re-painted.

When I was about 7/8 the neighborhood children were playing, running through one of our shortctus, Mrs. Noble's back yard. Being the little delinquint I was, the hanging laundry was a huge temptation to throw onto the ground.  Hardly 15 minutes passed before my mother was informed of my deed by some tattletale.  After a spanking, (yes kid's got spanked in those days), I was at Mrs. Noble's door describing my dastardly deed with apology. Needless to say, that behaviour was never repeated.

Everybody walked or drove their bikes to school.

In the summer you played outside until dark.

Nobody locked their doors. Probably didn't know where the keys were.

For whatever reason, everybody had a burn pit in the backyard, usually a 55 gallon drum or an upright concrete pipe. Certainly an attraction for little boys. The Griffith and Paret boys caught a bamboo hedge on fire with the drama of the fire department being called to douse. [The photo featured here is the remains of the burn pit in the back of the Garber home on Pithon.] 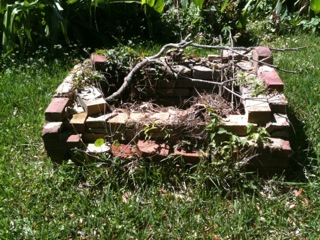 One Sunday evening my mother gave me $10.00 to go to Borden's for a gallon of milk.  On the way down the alley was again that magnetic trash fire burning. I proceeded to start throwing debris into the fire. Somehow I threw the $10 bill into the fire. That was one long tearful trip home to report what I had done, sans milk.

George Paret made the mistake of stopping off at the Griffith's on his way to the barbershop with $5 dollars in his hand. George's mom, Beverly, was having a pastel portrait of him painted the next day (every child had their portrait done by a traveling artist, Mr. Lee). The Griffith twins convinced George that they could cut his hair with the electric clippers they used to cut the mats out of their collie's (Rusty) fur. George got his Griffith haircut. The money was spent on ice cream at Bordens. George could not have his protrait painted the next day.  I never saw Mrs. Paret as angry as she was at us that day. Whew!

Ice cream on a cone at Bordens: One scoop 5 cents and 2 scoopes for 10 cents.

If you were building a treehouse your lumberyard was the recently torn down Krauss and Managan Lumber Co across from what is now the ERA Moffett Real Estate office.

What a terrific and idealic childhood neighborhood Margaret Place was. A much simpler time of carefree days!