During the preparations for Margaret Place's 100th Anniversay, an idea surfaced to put the word out to current and former residents to submit their "memories of Margaret Place."

Given the informal nature of this effort, expectations were minimal. Yet, the floodgate of memories opened. The submissions that follow provide a poignant glimpse into life in Margaret Place.

The NFL in Margaret Place 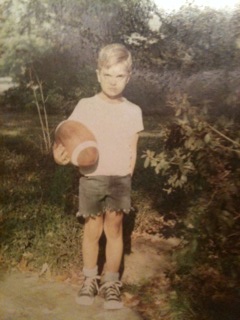 Margaret Place back in the late 1960's and throughout the 1970's was fortunate enough to have its own NFL team affectionately known as the Neighborhood Football League. The league was comprised of several robust teens and perhaps, in retrospect, braver pre-teens. Select members included local luminaries the likes of Robert Tete and brother Greg Tete (Wilson Ave.), Jimmy Gayle and Lee Leibendorfer (Grove St), Douglas Shearman, Christopher Baggett, and myself (Pithon St.....pictured to the right),  Brian Reddin and brother Patrick Reddin (Park Ave.).

Occasionally, other laddos would appear from other areas of the city and would be divided accordingly, usually by age and skill level. Wells Watson was one known to show (Shell Beach Dr) to lend skills at QB.

Margaret Place was once a little boy's aquatic wonderland, many years ago.

Correspondingly, for the homeowners on the Griffith Coulee curve and much of Lake Charles, it was a post-torrential, insidious nightmare.

On about May 21, 1953, the areas north of Calcasieu Parish were inundated with heavy, tropical rains. By comparison, Lake Charles had some rain but only light showers.

My parents left Lake Charles on about that date to cruise to Galveston with three other couples, leaving my siblings John, Nancy and myself with our trusted nanny, Vine.

But, as the late comedian Richard Pryor once said, "All that water gotta go somewhere." 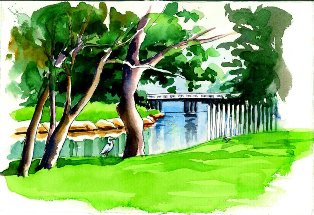 Along with my parents and 4 male siblings,we lived in paradise. It's positioning as the last house on a dead end street, while providing the freedom of traffic-free kickball on a flat surface, was not the best part.

Our home at 1607 Griffith abutted the coulee which flowed directly into the lake, which provided endless entertainment for the Lobdell brood of boys.

A Tale of Two Houses

My reentry into Margaret Place was a bit circuitous and a couple of things had to happen and they did.

This essay is not a sequel to my first centennial missal but again, a flood played a significant part.

I married Sue Cagle Bell in February, 1979 and got two children in the deal, aged nine and 11.

I lived in a wonderful bachelor's pad at 916 Shady Lane which is one block south of Prien Lake Road on Contraband Bayou. We tripled the size of the little house which had no neighbors and was a bit reclusive. Soon we were very lucky and got pregnant.

On May 22, 1980, Lake Charles received 22 inches of rain in 24 hours. When my feet hit the floor that morning, the rug was wet and the back yard was part of the bayou.

Crabbing and Fishing, The Coulee, and Neighborhood Dogs

My love of seafood and of fishing comes from growing up in Margaret Place, just a mere block from the lake.  We would spend many summer hours crabbing on Aunt Mary and Uncle George McNess's wharf overlooking the lake.  It was the perfect place to catch blue crabs and cast a line! The Paret's wharf was also a great place for catching those wonderful crabs and fish.  My Dad, the engineer, taught us oh so carefully, how to properly get the net under the crab as you slowly lift the string out of the water to get the crab (devouring the chicken neck) without losing it!   I can remember him saying when I flubbed up, "Geez Ann, how did we lose that BIG one!!" We caught lots of bushels of crabs over the years. Those family crab boils were awesome. I really liked to peel all the meat first and let it soak in lots of butter and lemon juice and then enjoy the crabmeat at one sitting. The crab claws always had the sweetest meat! 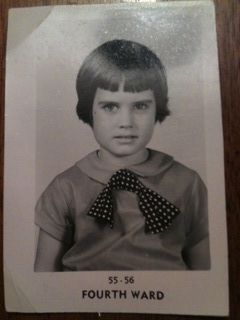 By the time my family moved to 105 Pithon St. in 1963, I was a freshman at LCHS. I was the oldest of the five children (Ellen, David, Catherine, Ann, and Vernon), and my younger years were spent at 1516 Alvin St. two blocks away. Our house backed up to Drew Park, and we spilled out the gate into the park to play under the supervision of dear Mrs. Landry. I am sure my mother was forever grateful for that gate. I spent many happy hours in that park.

What fun times my Fourth Ward buddies Willie Landry, Pat Hutchins, Susan Shidler, Carolyn Woosley, Tinnelle Mancuso and I had swinging, riding the merry-go-round, playing tetherball, paddleball, and climbing that HIGH slide. We made "houses" in the brush near the edges of the park and dug for sassafras roots. I can still hear those old Fats Domino 45 rpms blasting on the record player inside.

Those "Ozzie and Harriet" generation years seem so simple now compared to the computer generation. However, when my  father now at age 91, talks of his childhood growing up in Morgan City during the 1920's and 1930's Depression era - now that really seems simple! My parents even let us keep some ducks in the back yard until one night Charlie Moss's hunting dog Ike decided to pay a visit to our yard. Boy, were we mad at him for a while! Anyway, my family with five kids had definitely outgrown the Alvin St. house by the time my youngest brother Vernon came along. 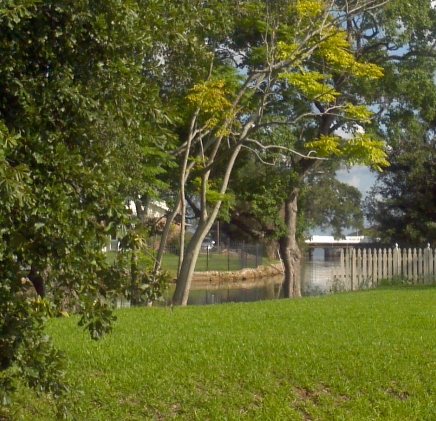 Griffith Coulee runs along the western border of Margaret Place. With its graceful curve and access to Lake Charles, "the coulee" elicits warm memories and stories.

Kim Stickell:  I remember the curve, Perkins Point is what is it now called! The entire coulee was the scene of many a childhood memory! Neighborhood wide Hide and Seek
(the Magnolias at Grove St were the best hiding spot), first canoe ride, venturing into the lake on a skiff with an outboard (so what now?) and building rafts!

Vernon Garber: Remember the raft days well. Having sisters that loved to expose themselves to the sun's harmful radiation, rafting seemed to be popular, and many teenagers from LCHS would hop on a usually well constructed homemade craft with 55 gallon drums strapped underneath for flotation; (several parked at various locales along the coulee) and venture out under the pithon coulee bridge into the lake with a small portable outboard attached, anchoring, and then waiting for some brazen, hormonal male counterparts to pick them up in a ski boat for a tour around the lake or up the river.

Growing Up in Margaret Place

My family, Dr. and Mrs. (Elizabeth) John Keller Griffith moved to Lake Charles in 1948/49 with their daughter Beth. My father began his medical career in Lake Charles with the Fisher Clinic located on the corner of Ryan (Dr. Michael DeBakey Drive) and Wilson Ave. Their first residence was a garage apartment located on the alley between Park and Wilson avenues owned by the Castle family. By 1950 my family had moved to a duplex apartment on the corner of Grove and Harrison streets living there when my twin brother (John Keller, III) and I were born. When my mother went to St. Patrick's hospital for our delivery, the other duplex occupants, the Cecil (Lillian) Cutrers kept my sister Beth until Granny arrived.  After a brief move to a home on Pujo St the Griffiths bought the home at 317 Wilson Ave. around 1953. The home had been previously owned/occupied by the Preston (Ethel) Savoys and Sheriff Ham Reid.

How Doug's Dog Got His Name

Kathleen and Walter Lobdell (109 Grove) called on my birthday eve (Nov 28) and asked me to come over for a Birthday drink.  Fine, Fine.

On arriving I said,  "What is that Noise?" Walter said, "There is a puppy under the house, and the men who have come can't get under there."

I called my son Douglas! To the rescue! Flashlight! Rain slicker! ( a cold, wet, miserable night!). He "bellied" under the house and came out with an adorable hungry puppy!

Douglas said, "May I keep him?"  Walter warmed milk...Kathleen got warm towels,. Walter said "We can name him "Dug Out"! 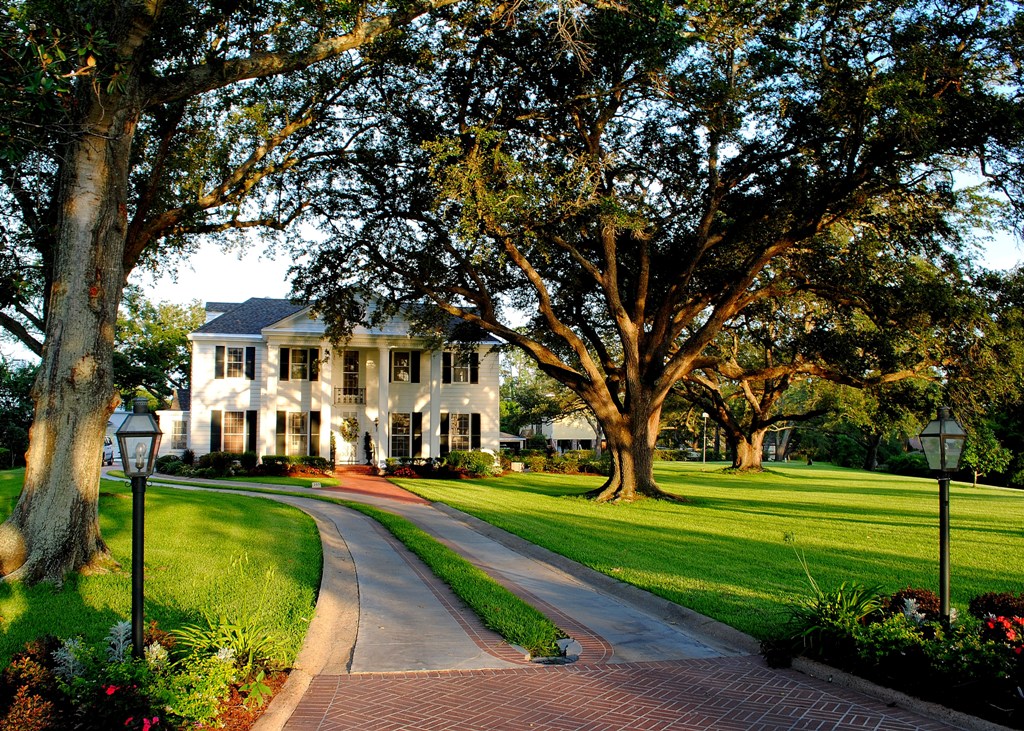 I remember Mr. and Mrs. Oliver Stockwell (she was a Holcombe) having an Easter Egg hunt in the large side yard of their home on Shell Beach Drive. Mama dressed us up in our Easter best and we walked over with other children to hunt eggs; walking with other kids thru the back alley that was behind Mrs. Managan's house (now Shearman) to Borden's and buying a hot fudge sundae for 24 cents. If we had fifty cents like Karen Ann Reames did (when she came over from Watkins Street), we would stay and eat our one sundae and then buy another one to split and still have 2 cents change. We always thought the two ladies that worked there were talking about us in some strange language. We figured out later that they were talking french! 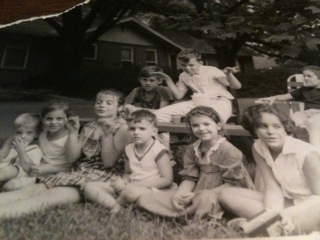 Growing up in Margaret Place was like living in TV show, Leave It To Beaver, such an idyllic time  in the 1960âs, where kids played outside until dark, very few houses had fences, our dogs played beside us without leash laws and no one had to worry about strangers.

One of my favorite things was roller skating everywhere we went, to 7-11 on Ryan Street to get deposits back on glass Coke or 7-Up bottles so we could head over to Bordenâs to get a 6 cent orange or grape popsicle, or a 5 cent scoop of ice cream in a real sugar cone.  Two scoops were 10 cents and if I had babysitting money (at 50 cents an hour) I would sometimes splurge on a Hot Fudge Sundae with chocolate instead of vanilla ice cream!  Oh my, I can still remember those wonderful flavors of ice cream all those ladies behind the counter served us through the years.   Sorry Blue Bell, but you donât  even come close to the Lake Charles Bordenâs ice cream!!!

No Car? No Problem!

I was graduated from Loyola (New Orleans) with a D.D.S. in 1946; passed my boards, and completed a preceptorship in anesthesia at Baptist Hospital in New Orleans. While there, I hitch-hiked (No car; NO money! for the Greyhound) to Lake Charles to visit my Mother on a week end. 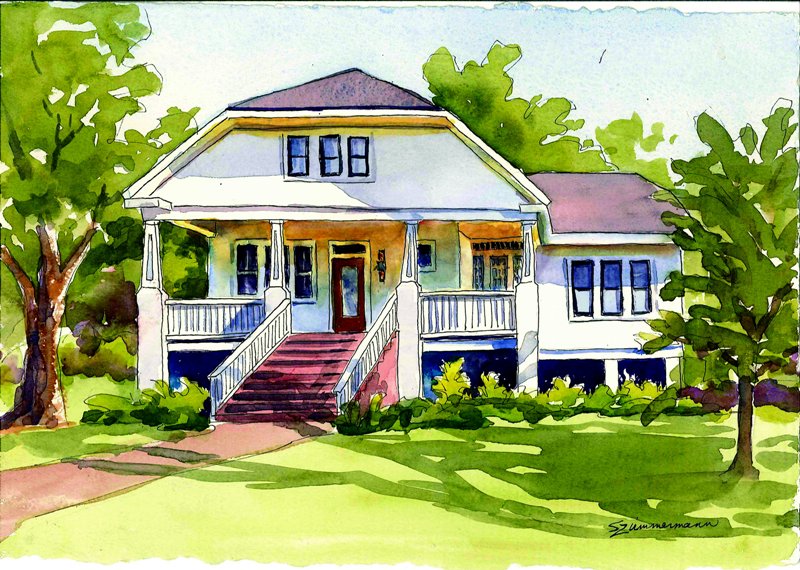 Drs. Walter Moss, Ben Goldsmith, W. A. K. Seale, Stanley Levy, and others urged me to come to Lake Charles as there was only one full time person doing anesthesia and he was being overwhelmed.

Dr. George Kreeger was only doing scheduled cases and was about to retire, etc. St. Patrick's was THE ONLY hospital in Lake Charles and environs.

Mother started trying to find a place for me--I had no car.

She found that I could rent a room at 101 Grove, the corner of Grove and Wilson.  So, when I left the Parish Prison (where I was living--thats another story), at least there was a place for me to stay in Lake Charles. As you might know, this was just after WW II and there was little housing to be had.....

There were 4 of us living there: Alvin Dark, Tom Kirby, Quentin Trahan, and myself.

One would be hard-pressed to find an area where so many have called multiple houses "home" within the same subdivision!

NANCY SHEPHARD DRAUGHN
Nancy Shephard Draughn grew up at 117 Pithon. Years later, she and husband Paul purchased 101 Pithon on the corner of Wilson and Pithon. The home at 101 Pithon is one of numerous "Landmark" homes in Margaret Place designated by the Calcasieu Historical Preservation Society. 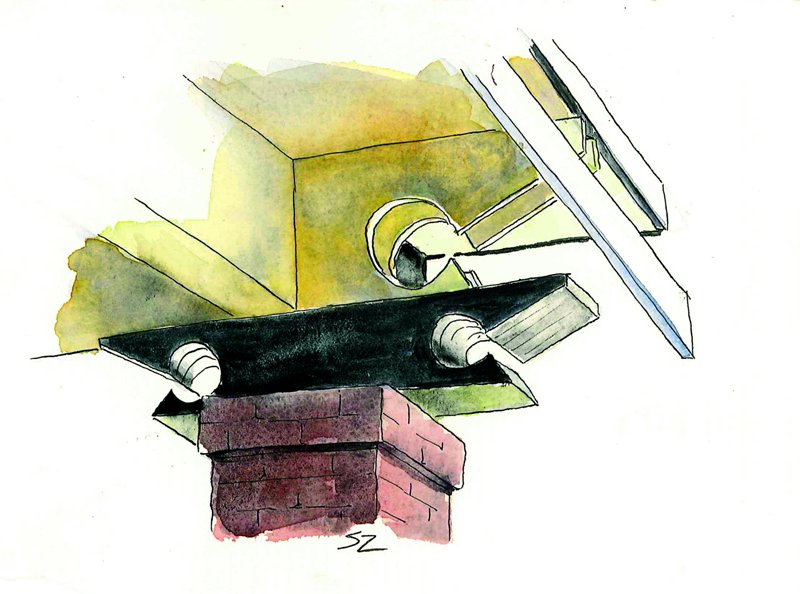 WILLIE AND BEN MOUNT
The Draughns (above) purchased "The Clooney House" on the corner of Pithon and Wilson from Senator Willie and Ben Mount, who moved to yet another Landmark home in Margaret Place at 205 Shell Beach Drive.