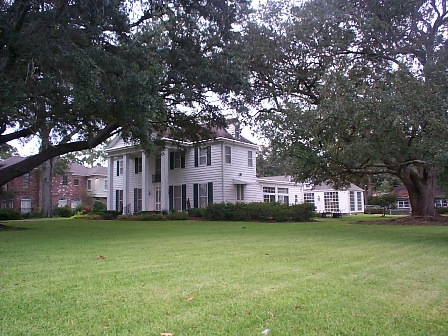 In her book, Lousiana Homes If Walls Could Talk!, author Nola Rae Moss referred to the home at 205 Shell Beach Drive as an "architectual giant".

The house was built in 1937 as a wedding present from Dr. R.G. Holcombe Sr. to his daughter Roseina, and son-in-law Oliver P. Stockwell.

The two story, white clapboard neoclassical structure reflects the ambiance of an antebellum plantation house. It is a copy of an old Southern plantation house near Thibodaux and was built at a cost of $20,550.00 by Contractor W. Y. Quick from plans by architect Owen James Southwell of New Iberia.

The home stands at the site of a swamp which was filled in by dredging up the lake bottom. The large oaks, which dominate the approach to the house, were moved to the site during construction.

The home is built from the wood of trees which flourish in this part of the South and cypress siding and oak floors, while magnolia wood panels the den.

Neoclassical characteristics include a full height front porch, boxed eaves, moderate overhang and dentil moldings. Double-hung windows with six over six and nine over nine sash arrangements are also typical of the style.

The columns that support the porch roof are characteristic of neoclassical design after 1925. Another notable feature is the elegant round window in the front porch gable. The proportioned and detailed dormers on the side and rear are additional characteristics that contribute to this home.

The home has only had two owners. The second owners were Senator Willie L. and Benjamin W. Mount. After Ben's passing, Willie Mount continues to reside in the home.

Of interest are the similarities between the two owners. Like Stockwell, Ben Mount was an attorney. Both attended law school at Lousisiana State University.

According to the Professorships and Chairs Page on the LUS Law website, "The Oliver P. Stockwell Professorship of Law was established by the LSU Board of Supervisors in 1993.This professorship was established by the family of Oliver P. Stockwell in recognition of his accomplishments in the field of law in the State of Louisiana. Mr. Stockwell was also widely admired and respected throughout America for his many contributions to his community and his service as chairman of the LSU Board of Supervisors. His leadership in establishing the Law Center as a separate unit of the LSU System is one of the most important events in the history of the Law Center."

Stockwell served as Chairman of the LSU Board of Supervisors, representing the 7th Congressional District. Ben Mount was sworn in as Chair in August, 2011.